Epic Games released Unreal Engine 4.27 last month bringing buckets of new features and updates across all sectors. Today we’re looking over the In-Camera VFX pipeline which has had numerous changes in UE4.27, improving both usability and performance. The new version of In-Camera VFX replaces the need of manually configuring config files externally and now presents users with a new interface within the engine to configure layouts, pixel pitches and projection policy’s.

Ndisplay 3D Config Editor – This is the replacement for the previous .CFG config file which was created externally and provided the engine with important parameters like Projection policies, viewport and node configurations. Now the Ndisplay 3D Config Editor does all of the above and provides new features allowing for easier visualization. The interface is broke into 4 specific tabs and a details panel. 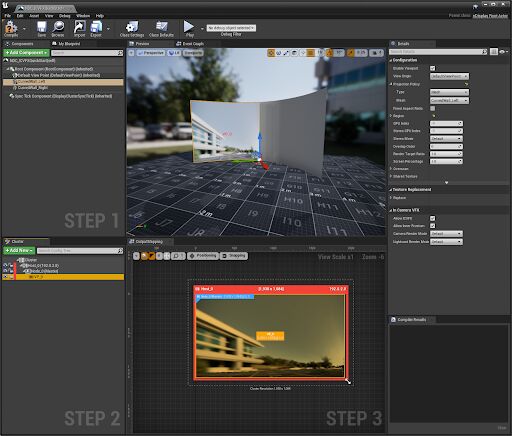 Switch Board – Switch board now stands in for the previous Launcher and listener apps whilst also adding a range of new user friendly features. These features include the ability to connect, launch and monitor all running nodes.

What is Nvidia Broadcast?

Nvidia Broadcast is one of few software’s which provides a AI driven compositing solution to users. Nvidia Broadcast allows users to apply effects over a in-coming camera feed, in this demonstration we used the “replace background” feature allowing us to get a composite without the need of any greenscreen; the way Nvidia archives this ability is by harnessing the power of both machine learning image analysis and depth perception.

Once we have our composited green background in Nvidia Broadcast we move forwards to streaming the feed into Unreal Engine. From the real-time engine we have the ability to place the talent into any 3D environment and now aren’t limited to the previous 2D dimensions.

See below our tutorial and demonstration video:

Moving forward, this proof of concept has proved itself to work and now needs officially testing back in our OSF lab on a GODBOX™ with a 4K camera feed input.

In a move that signs the company moving into the broadcast space, Disguise have lured Gideon Ferber away from Ross Video. In his new role Gideon takes on the tittle of Product Director, Broadcast.

Who’s behind the Disguise.

Not so long ago Epic Games bought a 5% stake in Disguise and the company also bagged a juicy round of VC funding. But this injection means the media server business must now strike out, grow sales and enter new markets. Disguise also attracted Phil Ventre from Ncam earlier in the year, the company succeeding in pulling together an impressive bench of Broadcast industry insiders.

But broadcast is a funny business full of political intrigue and mischief as vendors line up for permanent install gigs and shows. Having the right connections is key to getting in line early on in the project life-cycle. Looking at the Disguise web-site their historical examples of broadcast, showcase a bias towards live event style shows such as big music awards shows.

Looking at the broadcast VP market.

It will be interesting to see how or if, Disguise will wrap up Unreal Engines studio based virtual production features into some sort of paid for software offering for virtual studios or if they will stick to the big live show formats. The virtual studio broadcast space is very mature, with software and hardware from the likes of Brainstorm or Zero Density.

When the UE mothership sings the virtues of virtual production.